Last week-end was really hot with temperatures going over 30C (86F) and it was the perfect time to cool down and enjoy the weather playing water games in the area of Sinchon-dong.

Sinchon is already known for being a busy neighborhood from Seoul with several department stores, cinemas, restaurants and shopping areas. It’s famous for its nightlife with numerous bars, karaoke rooms, PC-rooms, DVD rooms and Korean billiards halls lining the streets covered in neon lights at night. The population of this area is rather young with a lot of students studying in the different universities from the vicinity with the most famous being Yonsei, Ehwa and Hongik universities.

Sinchon water gun festival originally started a few years ago as a small funny event where people (mostly students) used to play water games in the streets as a way to relax and refresh themselves the hot summer temperatures. Nowadays it evolved and became a major festival with thousands of people of all ages and nationalities joining the activities and various artists performing during the two days it is held. 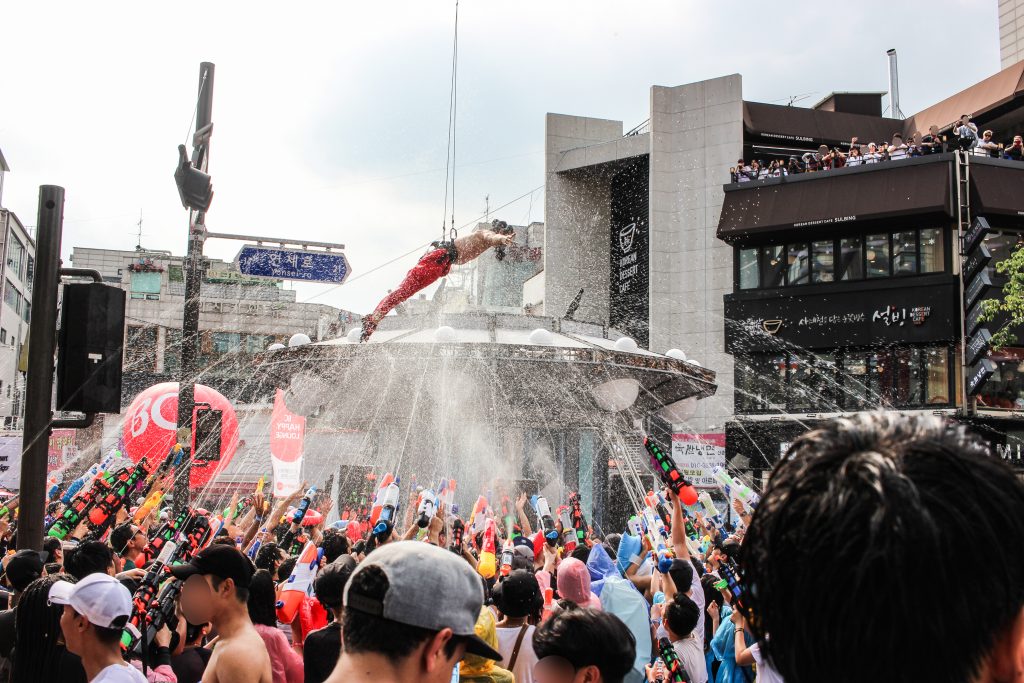 I was particularly impressed by the expansion and growth speed of this festival as I still remember 4 or 5 years ago when I was still studying at Yonsei University and attended the event. At that time, the organization was much “lighter” and only a few dozens to hundred people were attending. It was still a lot of fun and everyone was really friendly. 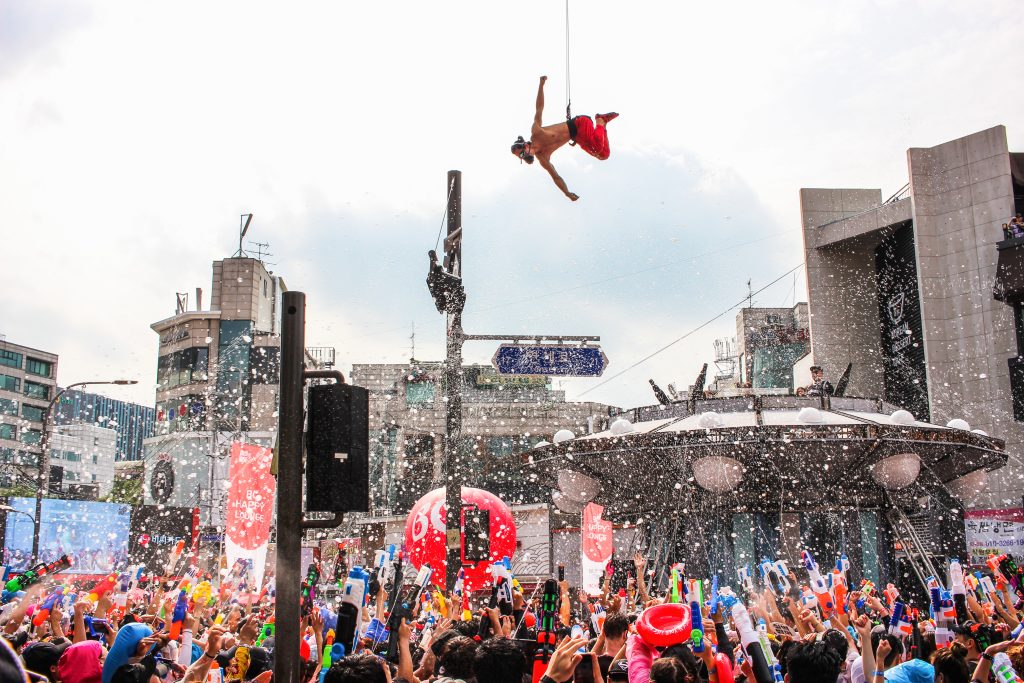 Frankly, I was expecting things to be more “complicated” this time taking into account the number of people attending the event and the much bigger organization but it was a sweet surprise to see that the festival didn’t lose its spirit. Everyone was enjoying the atmosphere, music and water gun battles. It was great to see parents with their children playing along with students and other adults. The strong population of exchange students in the area allows the foreigners to be fairly well represented but tourists and other expats also come to enjoy the festivities. 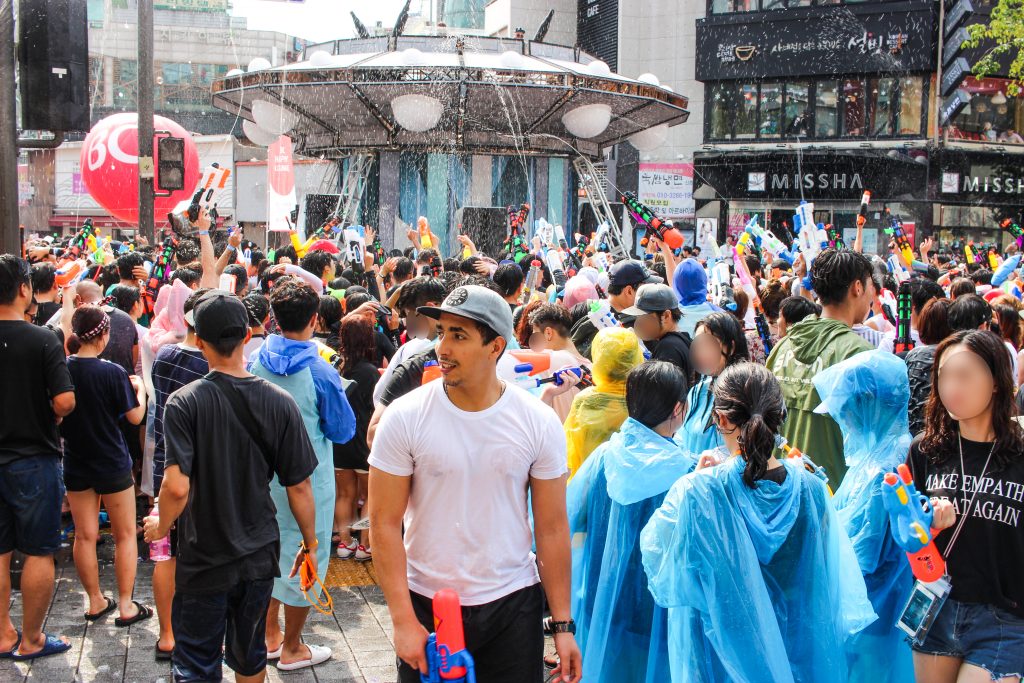 The festival is held every year at approximatively the same period. This year, it was held on the 29th and 30th of July 2017.

With a more developed organization comes a big lot of activities. This year, 5 main events were scheduled:

I could not try and enjoy all of them as they are sometimes scheduled either on one day or the other of the event however the Water attraction was quite nice (but a little a small).

People really loved the Galaxy DJ performance and it fitted well with the event as it was keeping people entertained and giving some kind of rhythm to the games and water gun plays.

I liked the idea of a landing alien ship in Sinchon and it was pretty well realized. The ship was represented by a huge ball hung on a crane coming down to the people and back up. 4 persons, disguised in aliens, were also hooked (safely!) to it and doing all kind of acrobatics. The interaction between them and the public was great in a very joyful atmosphere. 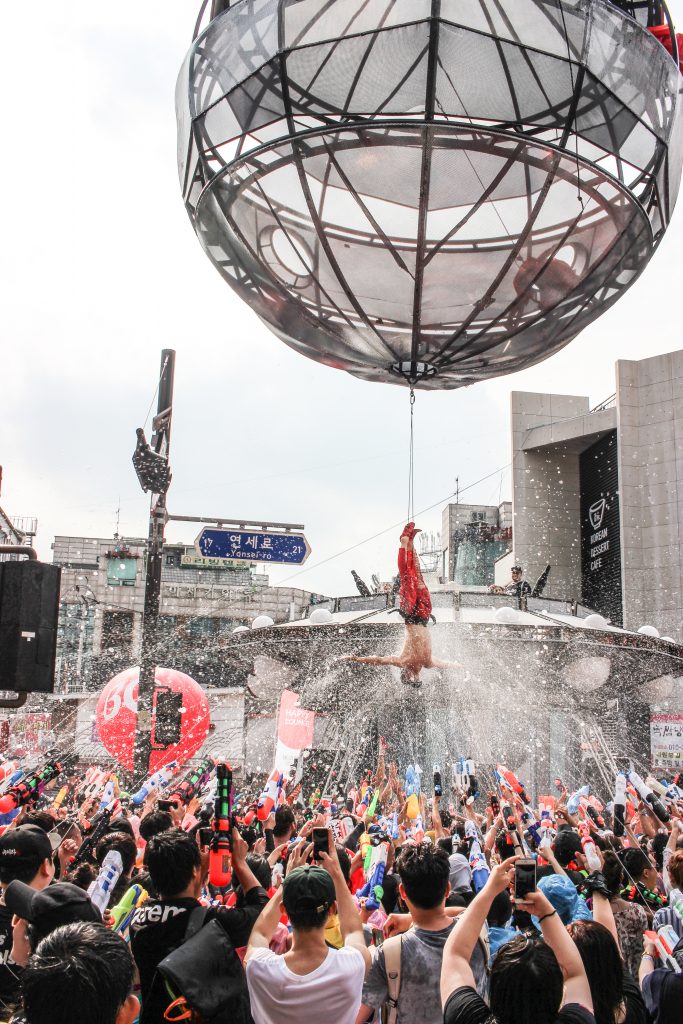 The bubble party was definitely a plus as I noticed many children playing in the bubbles and enjoying it a lot. 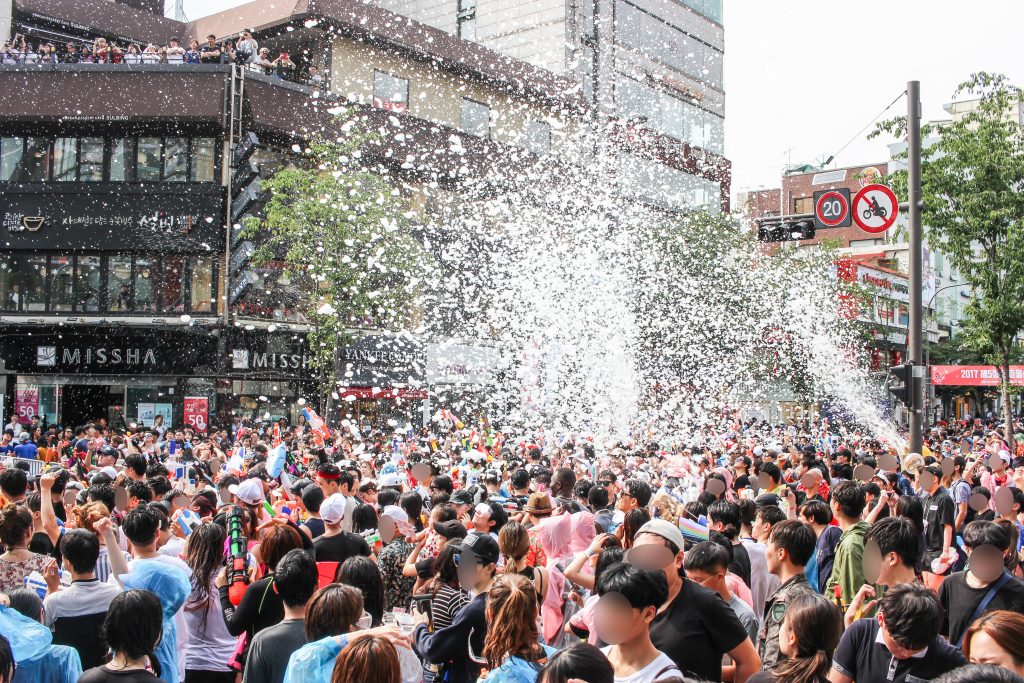 There are no specific requirements to participate in this festival except a minimum age of 7 (I’m pretty sure I’ve seen younger children with their parents and it didn’t seem to make any issue). You can purchase water guns (around 10000 KRW) and costumes of Aliens and Humans troops (around 23000 KRW for normal price and around 13000 KRW for pre-orders). Might seem a bit expansive but if you already have your equipment no problem, in this festival people are allowed to bring their own water guns etc. (as long as the equipment is safe!)

There are many ways to get to the area of Sinchon. It is well served by public transportation. If you are already in Seoul, you can probably get there in less than 30 min from most places. I will not recommend using cars as it is really hard to park in the area. It is still possible to park in the department stores parkings though.

Please refer to the below list of lines stopping around Sinchon.

From now on, I’ll try to increase the frequency of article writing so please do not hesitate to comments with any questions or topics you would like me to address.