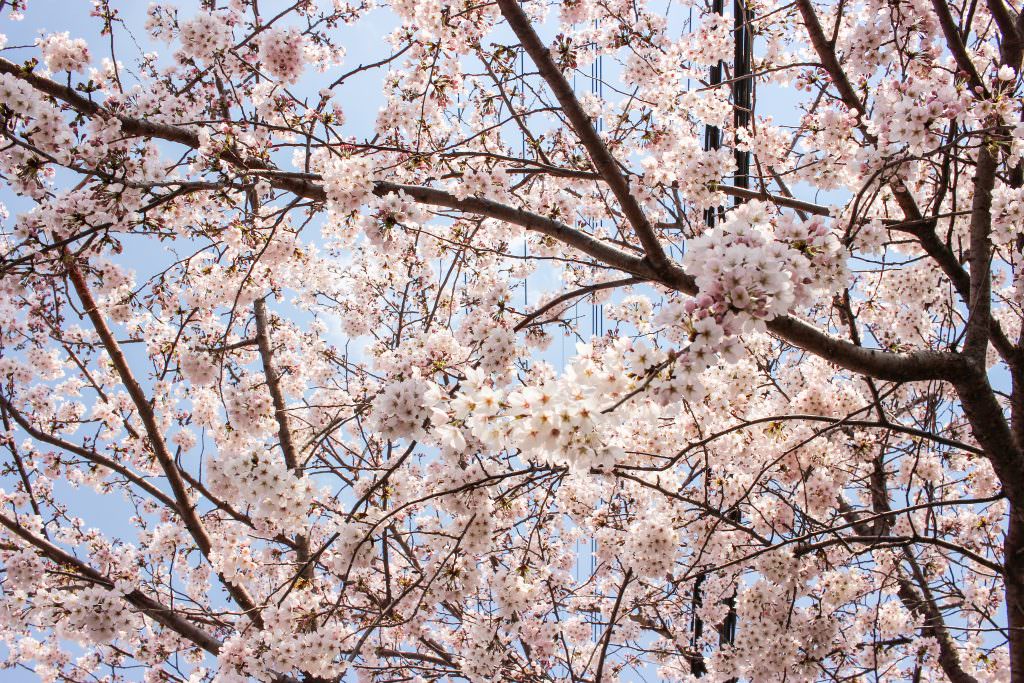 Jinhae(진해구) is a South Korean city from the region of Gyeongsangnam-do (south gyeongnam) which became a district of the provincial capital, Changwon(창원), on the 1st of January 2010. The city was originally developed as a naval base (Chinkai Naval Station) of the Japanese navy during the Japanese occupation period in the early 20th century. It is really famous for its annual cherry blossom festival which is held every spring usually between the 1st and 10th of April and the emblem of the city also contains a cherry blossom.

Not many people know about it but the history of the cherry blossom festival actually goes back to April 13, 1952 when a memorial service was held after erecting a statue of Joseon’s dynasty naval commander Yi Sun-Shin(이순신) for the first time in South Korea.

The festival then expanded in size with time until the first official “Jinhae’s cherry blossom festival” was held in 1963. Because it is mainly famous for its cherry blossoms people think that is all there is to see in this city but there are in fact many additional events and programs to promote local culture and arts revolving around this festival. It became so famous in the country that it is nowadays attracting more than 2 million domestic and foreign tourists a year. Having been there 2 times to enjoy the cherry blossoms I can definitely validate the fact that the streets and different parts of the city are heavily crowded (especially around the famous spots) but it is still possible to have a good time there. 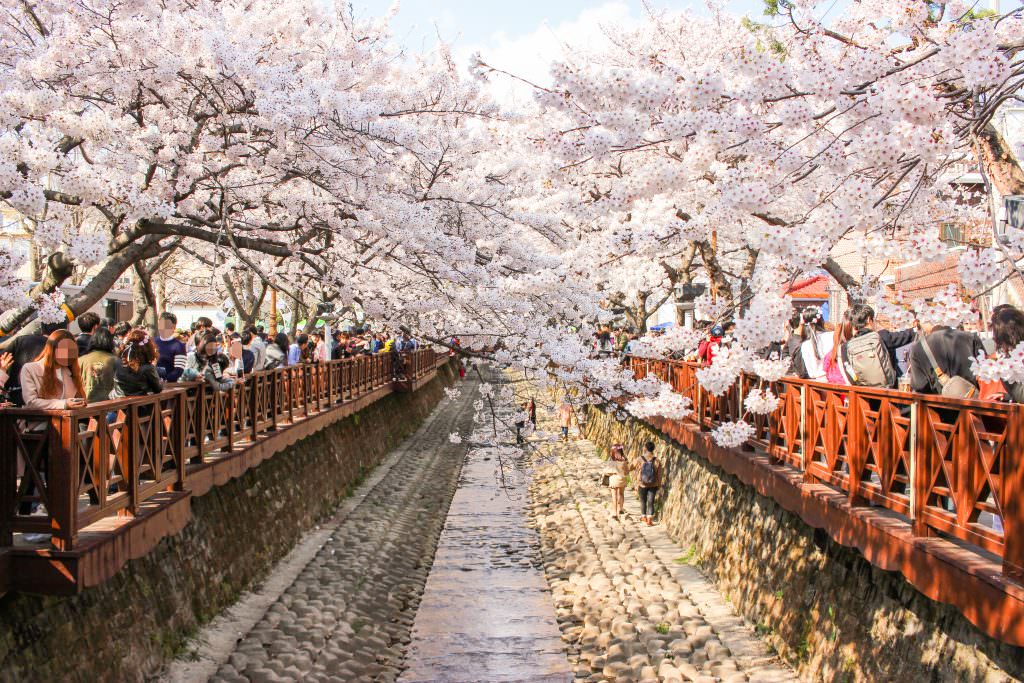 If you go to Jinhae for the cherry blossom festival, there are two spots that you MUST visit as there are considered to be the two best places in the city to enjoy it. One of them is the area around Yeojwacheon Stream (later named Romance Bridge by people after a famous drama was aired in this location). Yeojwacheon is a small artificial stream located in the north west area of the city and nearby two beautiful parks (Jinhae NFRDI Environment Eco-park and Jangboksan Park). It is surrounded by an incredible number of cherry blossom trees and you can walk around on the multiple wooden tracks and bridges which gives the area some kind of “rustic” side and lets you forget a little bit about this over-urbanization South Korea is so well known for. I’m pretty sure this place must have a lot more charm in the other periods of the year when you can enjoy walking around with less crowded streets. I recommend coming to this area twice (once during daytime and once during night time) as there are a lot of other decorations around the stream which can only be fully enjoyed at night as they are all bases on lighting effects and colors. 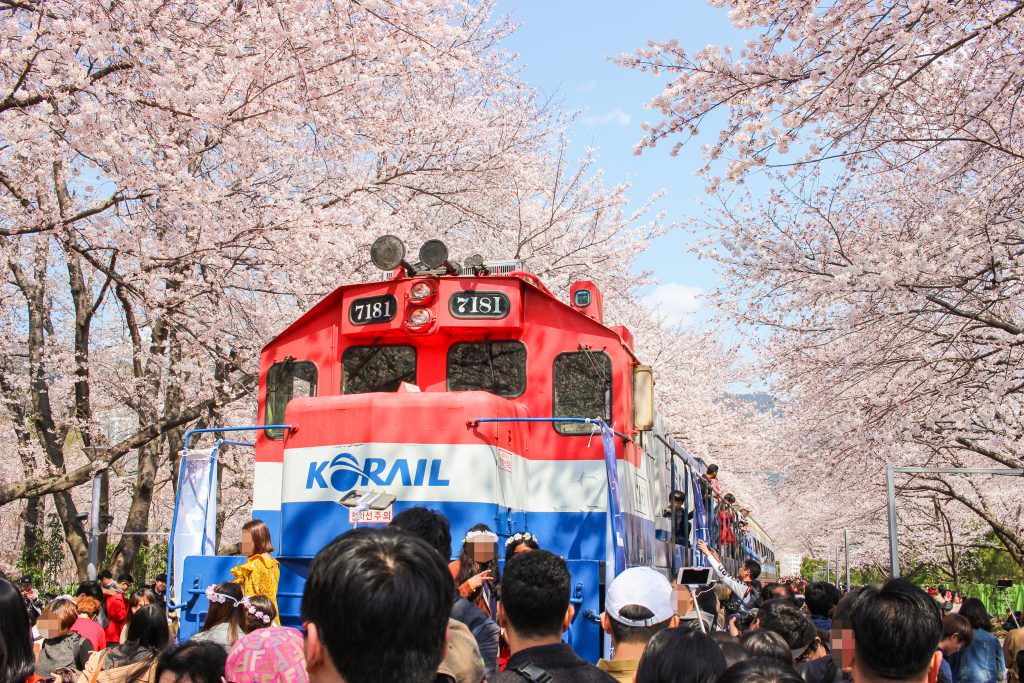 The second spot you have to see while visiting Jinhae is Geyonghwa station. This station is a small railway station located in the neighborhood of Geyonghwa-dong (경화동). During the cherry blossom festival in the beginning of April, you can enjoy the view of rows of beautiful cherry trees along the 800 meters of railway. This area is also often featured in Korean movies and was really famous for its rain of cherry blossom petals flying everywhere when a train was passing by. I can witness that the scenery was enchanting but unfortunately railway services in and out of the station have been discontinued as of February 2015. It is not possible anymore to see the train make a stop at the station however it seems the city is making sure to have one (not moving) exhibited at the station during the festival period.

This firework event is only held on the first night of the cherry blossom festival (usually on the 1st of April) at around 8pm. During approximately 20 minutes the firework display will light up the evening sky making and the port waters. If you have something for fireworks, that’s the place you have to be during this festival.

You have something for Korean dramas where the story occurs during the Joseon dynasty? You can see people wearing clothes from that time parading in Jinhae’s streets during that festival. This victory parade is meant to reenact the street parade held by Admiral Yi Sun-sin and his army after his victory in the Imjin war (1592-1598). This year it was held in the morning of the 7th of April.

This might actually be the main event of Jinhae Gunhangje festival. I couldn’t enjoy this performance myself as it was only held for two days (8th and 9th of April) but it seems a lot of people from the government, the military and regular civilians are taking part in it. In order to celebrate the military culture, different kind of performances such as concerts and honor guard shows are held. I’ll make sure to see it next time!

That’s another place I still need to visit! This park was built in 1979 in “the wake of a mountain landslide” and it seems the view from there is great. There are more than 10 thousand cherry trees in there waiting for spring to bloom and fill the area with their beautiful colors and sweet fragrance. That’s the place you have to be if you want to enjoy more natural and traditional places like temples and mountain tracks. 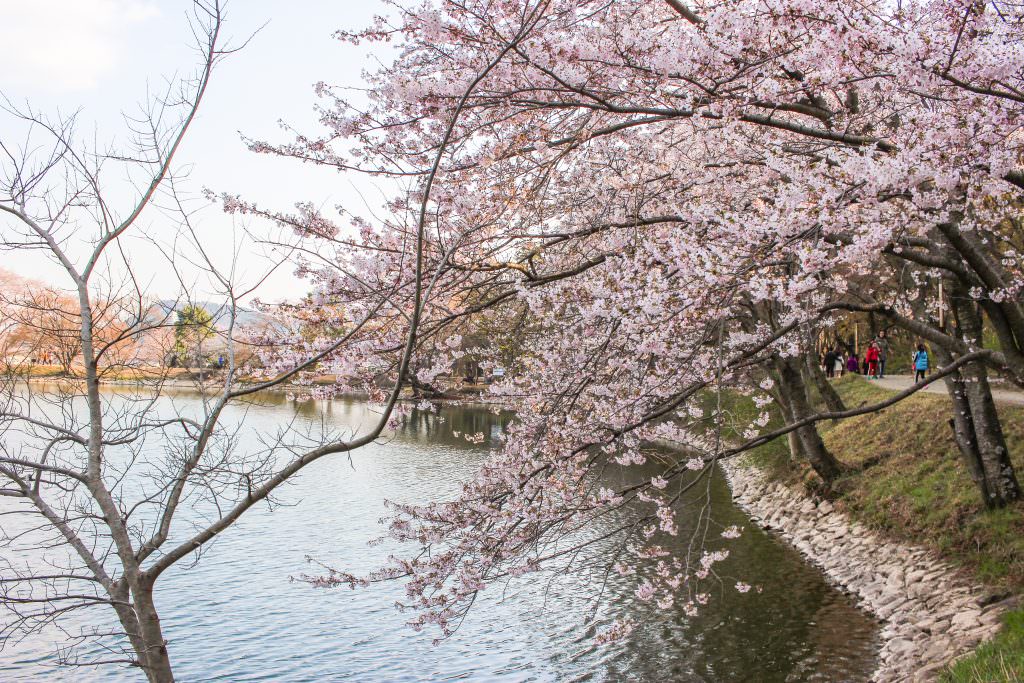 This park is located close to the end of Yeojwacheon Stream road (on the northern part). It serves as a habitat for diverse animals. You can also find 65 different species of trees and a great amount of different flowers in there. What I like about this park is that it is a great place to rest a bit and breathe some fresh air after spending the day in crowded and noisy areas. In this place, you will feel like you are in a totally different world. You can sit on a bench and enjoy the scenery, the lac, the streams and little animals. You can then go on and enjoy the festivities when your batteries are full again.

The city is host to the Korean naval academy museum which is divided in two buildings equivalent to a 2.622 square meters area. There are three different exhibitions halls in this museum and each one of them is focused on a different theme. If you are interested in Admiral Yi Sun-sin’s life, the first hall (Yi Chungmugong Hall) is for you. The second one (Navy hall) is about the history of the Korean navy. The last one (Naval academy hall) is more focused on the history of the academy itself. There is also an outdoor exhibition where you can not only discover the famous Korean turtle ship from Joseon’s dinasty but also some much more recent vehicles which were used during the Korean war.

As you can see, this park is located in the mountain of Jehwangsan in the middle of Jinhae. That’s where you can find Jinhae Tower and enjoy a great view over the city. It seems this tower is supposed to ressemble a Korean naval warship but I couldn’t really see the relation between both (Sorry haha!). However, that’s also a great place to see (with a museum on the two first floors and a garden) if you are willing to climb the 365-step staircase leading to it.

This hill is huge as it’s a 9 kilometer-long one. It’s known for its “cherry blossom tunnel” as 6 out of those 9 kilometers have cherry trees in line on the side. In addition to that you can also enjoy the great view on the different neighborhoods and mountains around. If you feel tired, you can catch up your breath and rest on one of the benches placed about 100m apart all around.